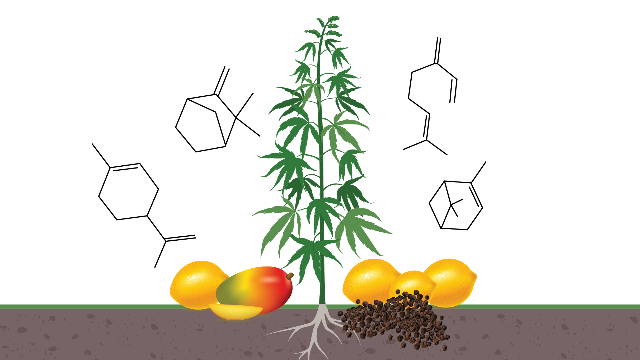 A huge amount of focus has been placed on cannabinoids, such as CBD. While CBD delivers a great amount of promise to its users, there is another group of hemp chemical compounds that should not be forgotten: Hemp terpenes.

Terpenes are very aromatic and are known to provide various hemp strains with unique flavors. Not only does terpenes give hemp a pleasant taste and smell, but it also plays a large role in the future of cannabis.

Terpene research is ongoing, but it will provide an interesting future for hemp lovers across the board. In this guide, we will discuss the biology and benefits that terpenes have to offer.

What are Hemp Terpenes?

Terpenes on a scientific level are hydrocarbons that contain a C5H8 molecular structure. Plants produce this chemical to help ward off insects, as well as attract bugs for pollination. Terpenes are also found in oils and resins of plants, herbs, and some insects.

Scientists have identified more than 20,000 different types of terpenes. They are a natural chemical compound that will provide a plant its aroma, taste, and color. These compounds are added to foods, perfumes, and used in aromatherapy.

Once the hemp plant reaches a stage of flowering, farmers can notice a distinctive smell. With over 200 different types of terpenes that may be present in the hemp plant, it is hard to uniquely describe their scent.

However, they are typically categorized into four broad categories: sweet, sour, spicy, and bitter. Changes in the varieties of terpene have been known to alter the overall wellbeing of a hemp user. Heat causes the terpenes to activate. Hemp users need to know the exact boiling point of their terpenes and cannabinoids, otherwise, they may not reap the overall wellness that it offers.

Since there are over 200 different types of terpenes that may be present in hemp, it is hard to know which terpenes to look for. Here is a rundown of the most popular terpenes.

Possesses a scent of mangoes, and is the most abundant terpenes in cannabis hemp plants. It has a tropical fruity smell and taste. Some may describe Myrcene Terpenes as having an earthy and citrusy aroma. Myrcene can also be found in lemongrass and thyme.

Who doesn’t love the smell of lavender? Linalool terpenes give off the pleasing aroma of lavender with a hint of spice. It has a floral aroma and is closely associated with the herb lavender. Lavender is often used to calm and relax individuals. Linalool is used much in the same way.

With the scent of pine, this terpene is naturally found in pine trees. In addition, it can also be found in other herbs such as rosemary, dill, and basil. A welcome scent among all those who encounter it.

Citrus is the word that users use to describe Limonene. It is perhaps the most pronounced terpene available. Found in all citrus fruits including limes, grapefruits, and lemons. In addition, it can also be found in peppermint and juniper. Not your typical combination. This terpene enhances overall wellness.

Beer lovers typically enjoy the aroma and taste of Humulene. This terpene is found in hop flowers, which are used to brew beer. In addition, it is found in coriander, which may be considered a citrusy herb. Humulene has a lower boiling point when compared to other terpenes.

Research on terpenes is relatively new, and all of the potential benefits are still being studied. Not only are they studying each terpene in isolation, but also how they interact with one another and with cannabinoids.

It is easier for researchers to study high-quality hemp strains now, and the future of terpenes holds many possibilities. Researchers believe that the study of terpenes will lead to a vital aspect of medical cannabis. Prices of hemp will be affected by terpenes, so it is important to understand what role these play in each hemp strain.

Characteristics of terpenes that stand out to researchers include those known as, “The Entourage Effect.” Terpenes work together to help activate other compounds within the hemp plant. Studies indicate that terpenes play a role in adjusting the strength of cannabinoids.

It is highly believed that since smell is often linked to emotion and memory within our brain, this will then indicate that the cause and effect produced by terpenes may help benefit your overall wellbeing.

Terpenes are present in a variety of herbs and plants. They are present in hemp and will show up in your CBD products. Terpenes and cannabinoids are what you could consider a package deal.

What do terpenes do?

Terpenes provide flavor and aroma. In addition, there is ongoing research about the effects that this compound provides. Each strain of terpenes offers a unique smell, taste, and effect. You may have two plants that have similar cannabinoid structures, but the terpenes structures may present to be completely different.

Do you get high from terpenes?

Terpenes provide a unique experience. They can easily influence the overall wellbeing that you receive. So, if you are looking to improve your overall experience then you may consider looking at the terpenes that are offered in your products.

Does hemp have terpenes?

Researchers have been able to identify over 200 different terpenes in hemp. Ongoing research is still unveiling new strains.

Do terpenes get you high?

Terpenes are a compound that will not get you “high”. Rather, they work indirectly with the same cell receptors that cannabinoids do. By themselves, they will not get you high, but they can work with other chemical compounds in cannabis to help enhance effects.

Can you smoke hemp?

How do terpenes make you feel?

Terpenes do not contain THC, which is the psychoactive ingredient in cannabis. Therefore, you would not get any type of effect from terpenes alone. However, they can alter the effects of cannabis strains when added.

Are terpenes legal to buy?

Terpenes do not contain THC. Unlike marijuana, terpenes are legal in every state. They can be purchased as an isolate or profile. You can then add them to a drink, food or anything else you please. There are thousands of terpenes that come from various plants.

Will terpenes make you fail a drug test?

Terpenes alone will not make you fail a drug test, as they do not contain any THC.

Why are terpenes so expensive?

Terpenes that come from a cannabis plant tend to be pricy. However, if you are looking to source terpenes that are plant-based, they are not too expensive.

Is CBD a terpene?

Just like CBD, terpenes are a component of hemp. So, no CBD is not terpene, they are two separate components that can be found in hemp.

Terpenes come from plants and are a natural compound. So far, more than 200 terpenes have been discovered in the cannabis plant.

Are terpenes legal in the US?

Yes, you can buy terpenes in the USA. They are natural and contribute to the aroma and scent of a plant.

How many terpenes does hemp have?

There have been over 200 terpenes identified in hemp. Studies are always ongoing, so more may be on the horizon.

Check out our guide on smoking CBD flower.