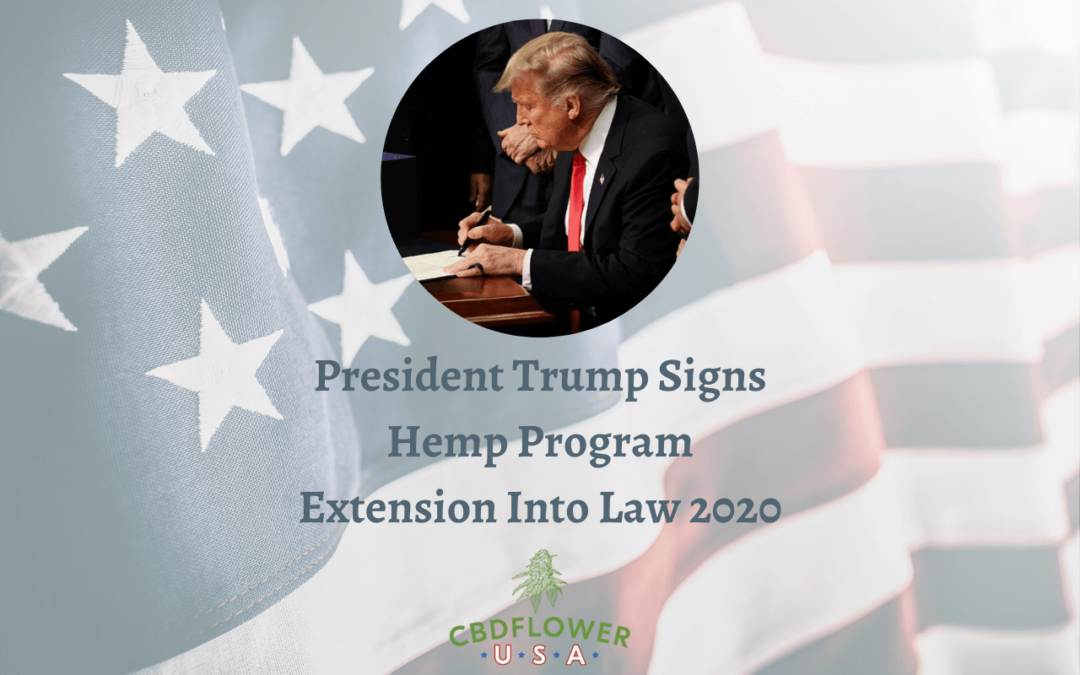 The United States Senate passed a continuing resolution, which will provide short term funding to prevent a government shutdown that would include the House’s language to extend the hemp program extension through September 2021.

National Industrial Hemp Council Board Chairman Patrick Atagi was quoted saying, “We are thankful to both the House and the Senate for listening to us back in August when we wrote about the importance of this program. With the Senate’s vote today, hemp farmers across the country will have more certainty tomorrow while states continue their important work to submit final plans to the USDA for approval.”

Why Was The Extension So Important?

Since 2014, when the Farm Bill was signed into law, farmers have legally been able to grow hemp across the nation. This bill created a pilot program that allowed hemp to be grown, but it was always the plan to receive USDA approval.

The 2018 Farm Bill removed hemp from the Controlled Substance Act, and states were given a deadline of October 31, 2020, to provide finalized plans to the USDA for approval because the pilot program would be expiring.

This meant that all states across the nation would need to comply with the new regulations that were set by the USDA before the pilot program expired. COVID-19 has presented a lot of obstacles, especially for the state departments of agriculture to finalize their plans and provide them to the USDA for approval.

The H.R. 8319 Bill was presented by the United States House of Representatives, which has provisions to allow current hemp farmers to continue operating under the pilot program until September 21, 2021. This would extend the program by nearly a year and allow states to comply with USDA regulations.

The extension of the pilot program provided an answer that many industry leaders and lawmakers were seeking, as hemp growers needed time to adjust to the USDA’s interim final rule (IFR) on hemp. These regulations align with the 2018 Farm Bill and are a more robust set of guidelines.

According to the United States Hemp Roundtable, more than a dozen states have been operating under the pilot program during the 2020 growing season. There was a provision to extend the pilot program in a recent House Agriculture Appropriations bill.

The general counsel for the U.S. Hemp Roundtable, Jonathan Miller said, “It became clear that the bill would not pass by Congress’ September 30th deadline. This is when we changed tactics and sought this continuing resolution.”

Individuals, organizations, and state officials have all advocated extending the hemp pilot program throughout 2020. On August 5th, Patrick Atagi, the board chairman of the National Industrial Hemp Council, and Barbara P. Glenn, Ph.D., the CEO of the National Association of State Departments of Agriculture (NASDA), delivered a letter to the members of Congress. It asked for the pilot program to be extended through 2021.

In the letter, they voiced their concern about the failure to extend the program would leave hemp growers “in a perilous situation through no fault of their own.”

Atagi and Glenn go on to mention, “Many states will be unable to meet the forthcoming deadline of October 31, 2020. These states have cited that due to the unprecedented national COVID-19 pandemic, state regulators have been unable to work with their state legislatures to acquire necessary statutory amendments.”

The commissioner of agriculture for the state of New York, Richard Ball, boldly stated that the state of New York would not develop its hemp plan unless an extension to the current pilot program was put in place. Ball reportedly has had issues with the “substantial elements” of the IFR’s requirements.

Many within the hemp industry share Ball’s view of the IFR. Several key factors need to be revised according to Ball. Some that have been pointed out include:

It is thought by Miller and a number of other industry leaders that the extension may allow the USDA some time and flexibility to work out these concerns and have them finalized by the end of next year.

“The IFR has caused tremendous concern in the industry. Particularly, we’re concerned with the DEA’s influence over the process,” Miller says. “We really want to get the DEA out of the business of regulating hemp.”

In a separate letter to the USDA, U.S. Senator Chuck Schumer (New York) called for an extension to the pilot program, as well as a delay in issuance of the final rule on hemp until 2022. At the moment, the final ruling on hemp is due to be issued on November 1, 2021.

Schumer was quoted saying, “additional regulations amid the pandemic would crush the budding hemp industry. Regulating this rapidly emerging industry is a must, but the timing of new regulations is important and the current economic crisis must be considered.”

Schumer goes on to say, “That’s why today I’m urging USDA to delay their issuance of a final rule until 2022 so the hemp industry across the country and in Upstate New York has a chance to grow and create good-paying jobs at a time when jobs are needed the most. Delaying new regulations will help pull New York along in the recovery process as the nation deals with the impacts of the pandemic.”

The list of support to extend the pilot continues. In August 2020, the NIHC along with the National Association of State Departments of Agriculture (NASDA) joined in writing to both the House and Senate asking for the hemp pilot program to be extended as part of the coronavirus relief package or as part of a continuing resolution.

The NIHC and NASDA wrote to the USDA Secretary Sonny Perdue on the same day asking that he use his discretion to help extend the program. The USDA then re-opened the comment period on the hemp interim final rule.

What’s Next for The Hemp Industry?

For now, the extension has been passed and was signed by President Trump. This means that the pilot program has been extended until September 2021. States are now responsible to continue to work with the USDA to get their plans submitted and approved.

Meanwhile, the USDA has time to revise rules before they are finalized next year. There is a lot that can happen in a year, and the hope is that the USDA will amend some of its rules to help improve regulations for hemp growers.

However, state officials will not want to delay when it comes to getting their plans into action, as there is a process of review that must happen before their plans are finalized and approved.

“Hemp is a bipartisan issue and that’s why Senate Minority Leader Chuck Schumer (D-NY) and Senator Cory Gardner (R-CO) both expressed an interest in extending this program. We thank them for their leadership and we look forward to President Trump signing this important legislation into law,” concluded Atagi.

Disclaimer: CBD Flower is not used to treat, cure, or mitigate any disease, illness, ailment, and/or condition. We make no representations as to intended use or suitability for use.